Ellipsometry is measuring the polarization state of the reflected light

Film Sense ellipsometers use polarized light to non-destructively characterize samples.  In an ellipsometer system, the Source emits light with a known polarization, which is obliquely incident on the sample, and the Detector measures the polarization state of the light reflected from the sample.  See the video for a 3D visualization of the reflection of polarized light from a sample.

The ellipsometric parameters measured on the sample (and reported in either the Ψ/Δ or N,C,S representation) can be further analyzed to determine sample properties of interest, such as film thicknesses and optical constants.

The most well known advantage of ellipsometry is its extreme sensitivity to very thin films.  This advantage derives from the ellipsometric Δ (Delta) parameter, which is a phase quantity.  By measuring the phase between p- and s-polarized reflected beams, ellipsometry provides precise determination of film thickness, down to sub-monolayer film thicknesses, even though the wavelength of the measuring beam (≈ 500 nm) is very long compared to the film thickness (which can be < 0.1 nm).  With Film Sense Multi-Wavelength Ellipsometers, thickness precisions of better than 0.001 nm can be achieved on a wide range of samples, ranging in thickness from 0 to 5000 nm.

An example which directly utilizes the information content in the 2 ellipsometric parameters Ψ (Psi) and Δ (Delta) is the calculation of the pseudo-dielectric function <ε> of a substrate. The dielectric function ε is one way of characterizing the optical properties of a material, and it is a complex value, with a real part ε1, and an imaginary part ε2.  The dielectric function is also the square of the complex index of refraction ñ(the real part of ñ is the index of refraction n, and the imaginary part of ñ is the extinction coefficient k).  Assuming the measured sample is a substrate with no overlayers or roughness, the pseudo-dielectric function for the substrate <ε>can be calculated from the ellipsometrically measured Ψ (Psi) and Δ (Delta) values, using the formula below (the parameter θ is the angle of incidence of the measurement beam).  Since the preceding assumptions are not always rigorously satisfied, the prefix of “pseudo-” is applied, as denoted by the <brackets>.

Obtaining the real and imaginary parts of the dielectric function of a substrate (or equivalently, n and k for the substrate) from reflectivity data would require measurements over a wide spectral range, combined with data analysis with an appropriate dispersion model.  With ellipsometric data, the dielectric function (or equivalently, n and k) for a substrate can be directly calculated.

Determination of Film Thickness and Index of Refraction

Another example which demonstrates the information content advantage of ellipsometry is the determination of the thickness and index of refraction of a transparent thin film on a substrate.  Since ellipsometry measures 2 parameters, Ψ (Psi) and Δ (Delta), it is possible to directly determine 2 sample related parameters, which in this case are the thickness of the film d, and index of refraction n1 of the film.  This is done by numerically inverting the thin film interference equation shown below.  In this equation, the reflection coefficients rp,s at each interface and the film phase factor β are calculated using the index of refraction for each media, the angle of incidence θ, the Fresnel equations, and Snell’s law (the Film Sense software handles all these calculations internally).

Another limitation arises if the film thickness determination is done with a traditional single wavelength ellipsometer:  multiple thickness values can satisfy the thin film equation, leading to a thickness “periodicity” problem.  With Film Sense Multi-Wavelength Ellipsometers, the thickness periodicity problem is eliminated by the multiple measurement wavelengths.

As an optical technique, ellipsometry is fast and non-destructive, and can be performed in a wide range of environments: in the lab, on a factory floor, in a vacuum chamber, or even with a liquid ambient.  A unique advantage of ellipsometry is that the measured parameters are not dependent on the intensity of the measurement beam.  This advantage comes from the definition of the ellipsometric parameters by a ratio.  The beam intensity independent property of the ellipsometric measurement can be very beneficial in situations where maintaining constant beam intensity would be challenging, such as in situ measurements, or long term measurements requiring high stability.  Ellipsometry is also less susceptible to many types of sample non-idealities, such as scratches, dust, defects, and macroscopic roughness.  These types of sample non-idealities scatter the measurement beam, such that light scattered from these non-idealities does not enter the ellipsometer’s Polarization State Detector (which collects only the ideal, specularly reflected light from the sample).

The Film Sense Light Source Unit provides the Polarization State Generator for the ellipsometer system.  4 or 6 visible Light Emitting Diodes LED’s are used as light sources.  LED’s are an ideal light source for an ellipsometer system.  The only down side to using LED’s as a light source is their wide spectral bandwidth, but this is accurately and automatically corrected for in the Film Sense data analysis procedure*.  Since they have long lifetimes (>50,000 hours), the Film Sense LED’s never need to be replaced or realigned over the lifetime of the instrument.  In operation, the LED’s are sequentially scanned in less than 10 ms to provide ellipsometric data at 4 or 6 wavelengths essentially simultaneously.    The internal optics of the Film Sense Light Source Unit* combine the light from the LED’s into a common beam, which is bright and uniform.  The Film Sense Light Source Unit also includes a Polarizer mounted on a manual rotation mechanism.  In normal operation, the Polarizer is left at a fixed position.  To calibrate the orientation of the Source and Detector units to the sample, the Polarizer is manually rotated to 4 positions.  This simple calibration procedure takes only a few seconds, and only needs to be done when the Source and Detector units are mounted on a process chamber for in situ measurements, or when the Source and Detector units are remounted to the ex situ measurement Frame. 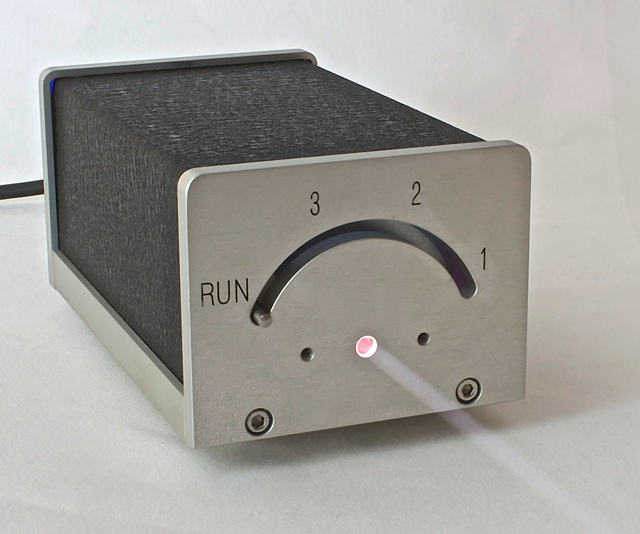 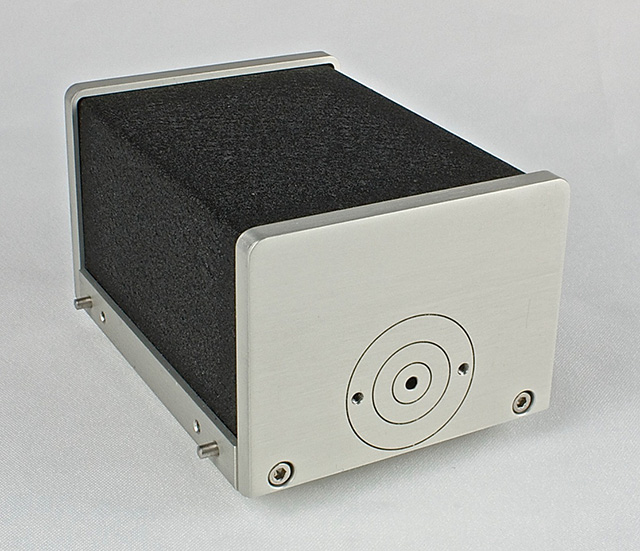 The Film Sense Detector Unit provides the Polarization State Detector for the ellipsometer system.  The Film Sense Detector design has no moving parts, and is based on the Division of Amplitudes Polarimeter (DOAP) concept first proposed by Azzam (‘‘Division-of-amplitude photopolarimeter (DOAP) for the simultaneous measurement of all four Stokes parameters of light’’, R. M. A. Azzam, Opt. Acta Vol. 29, page 685, 1982).  One disadvantage of the traditional DOAP design is that the polarization measurement accuracy can be affected by the alignment and uniformity of the incoming beam.  To overcome this disadvantage, the Film Sense Detector implements a novel optical configuration* to cancel measurement errors caused by mis-alignment or uniformity of the measurement beam.  Since there are no moving parts, the ellipsometric data can be acquired very quickly (10 ms minimum acquisition time for 4 or 6 wavelengths of data), and long term measurement stability and robustness is also improved.  The computer which controls the data acquisition and performs the data analysis is also integrated into the Film Sense Detector Unit, resulting in a compact sensor that requires no additional control electronics.

For typical measurements, the Film Sense Light Source and Detector units are mounted on the standard frame.  This frame can accommodate samples up to 200 mm in diameter, up to 23 mm in thickness, and it provides manual height adjustment for the sensor units with respect to the sample surface.  Custom attachments can be added to the frame, and the Light Source and Detector units can be attached to a custom frame (contact us for CAD drawings for custom interfacing or OEM applications).  Standard options for in situ mounting, focusing, and more, are also available (see Products page). 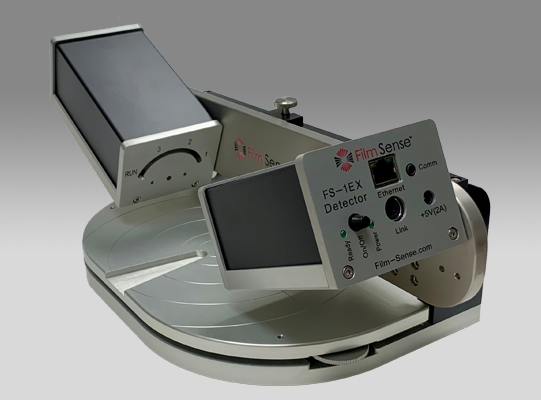 Powerful ellipsometry analysis software that is easy to use 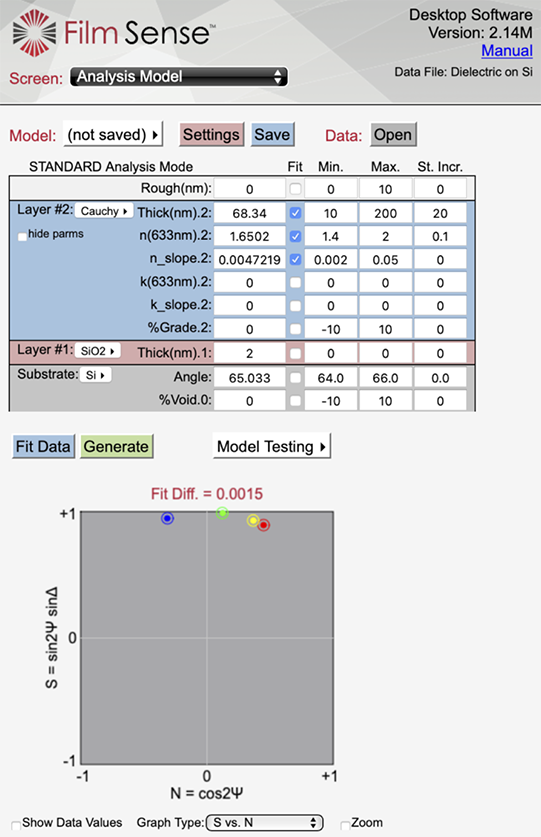 The Film Sense software acquires and analyzes the ellipsometric data, and reports the sample parameters (thickness, index of refraction, etc.) that are derived from the measurement. The Film Sense software runs on a computer which is inside the Detector unit, and a standard web browser provides the user interface for the software. Any desktop, laptop, or tablet computer that supports a modern web browser (Windows, Mac OS X, Linux, iOS, Android) can operate the Film Sense ellipsometer using its Ethernet connection (no Internet or web access is required). A major advantage to the web browser interface is that no software installation is required, which greatly simplifies the setup and operation of Film Sense ellipsometers. 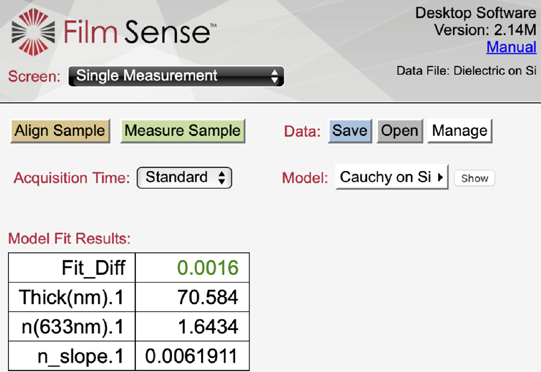 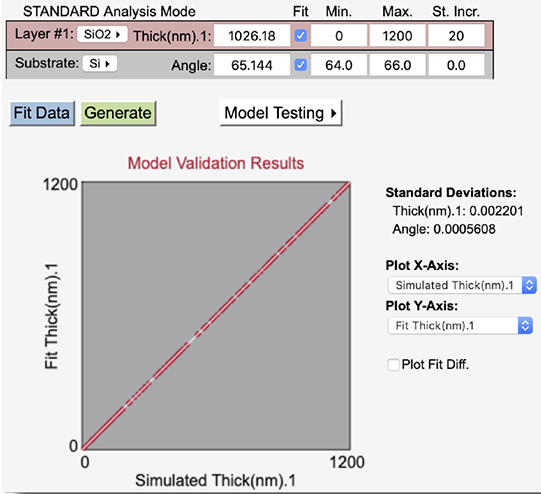 The Model Validator feature verifies that all model fit parameters will uniquely converge over the specified ranges.

The Film Sense Application Programming Interface (FS-API) can be used to control and communicate with the Film Sense Mulit-Wavelength Ellipsometers. At the low level, the FS-API communication link is implemented via TCP/IP sockets, and the command and data messages are exchanged in a simple binary format.

Contact Film Sense to get more information or a quote